“"EXPLORING with RESPECT so that we can UNDERSTAND. This is our motto, which our youngest generation, "the adults of tomorrow", seems to love so much. ”

Since 2009, Jonian Dolphin Conservation has been conducting scientific research activities with the primary goal to preserve and protect the cetaceans of the Gulf of Taranto, in the northern waters of the Jonian Sea. Dolphin watching days at sea, organized for visitors and tourists by the JDC, are our way to raise the financial resources necessary to continue our research. They constitute an integral part of a broader project called citizen science, namely, the public participation in scientific research projects geared towards promoting activities of environmental education emphasizing the importance of the conservation of the marine heritage of the Jonian costs. The JDC Association has been able to combine scientific research and tourist activities by offering local and international tourists a unique experience of dolphin-watching in their natural environment. Dolphins are also a symbol of the city of Taranto

You will actively participate in sailing on board our brand new boats, designed and built specifically to help guests get involved in conservation activities for the protection of cetaceans that have lived in these waters for over 4,000 years.
With the help of the researchers of the JDC our guests will identify specimens, photograph their dorsal fin (photo identification), and will hear, and record, their whistles and clicks (vocalizations). Furthermore, they will collect environmental data on the evaluation of the Ionian Sea (oceanographic parameters) and fill in the cards of the cetacean sightings. All this data will be used for the compilation of scientific publications, so important for the protection of cetaceans. Thanks to this contribution, we will be able to continue to integrate our database.
During all these activities, our crew will offer our guests a taste of the local specialties of our Apulian cuisine. The departure is at 10:00 a.m. The recommended boarding time is 30 minutes prior to departure. We return approximately around 3:30 p.m. You can find the answers to all your questions in the FAQ section.

Contribution for the Safari "Researchers for a day"
Duration 5 hours approximately
Adults: Euro 40
Boys 4 - 11 years: 20 euros
Infants 0 - 3 years: FREE
By participating in the "Researchers for a day" program, you will be immediately associated and by accessing our website you can subscribe to the mailing list to be always informed about all the activities we do also thanks to your contribution, select one date and share with us!


WHAT HAPPENS IF WE DO NOT SEE DOLPHINS?
A: Your next trip we will offer you a 50% discount and if we do not see dolphins even on that trip, then the third Safari will be completely FREE and will always be until you see dolphins (very rare).
Remember that our catamaran has a 90% sighting percentage.

Cetaceans of the Gulf of Taranto

The species of cetaceans sighted in the Ionian Se and, in particular in the Gulf of Taranto, do not represent many differences espect to the species of cetaceans that, more generally, are present in the Mediterranean Sea. There are, however, differences in the distribution and abundance of species due to the different geo-morphological and chemical-physical characteristics of the Ionian Sea compared to the Tyrrhenian Sea and the Adriatic Sea. In general, in the Mediterranean Sea, there are 12 species of cetaceans belonging to the suborders of the Baleen Whales and Thooted Whales. The species are divided in: regular species (regularly present in the Mediterranean area) and occasional species (which occasionally appear in the Mediterranean, especially in the western part). The regular species are: Striped dolphin (Stenella coeruleoalba), Bottlenose dolphin (Tursiops truncatus), Short-beaked Common dolphin (Delphinus delphi), Risso's dolphin (Grampus griseus), Sperm whale (Physester macrocephalus), Fin whale (Balaenoptera physalus), Pilot whale (Globicephala melas), Cuvier's beaked whale (Ziphius cavirostris). The occasional species are: Common minke whale (Balaenoptera acutorostrata), Killer whale (Orcinus orca), False killer whale (Pseudorca crassidens) and Rough-thooted dolphin (Steno bredanensis) sono considerate specie occasionali. Each of these species has specific ecological needs, which determine their geographical distribution in correspondence with the environmental characteristics offered by the Mediterranean (oceanographic and physic-chemical variables, depth, distance from the coast, primary productivity, availability of prey, etc.). Researches carried out on the Italian seas about cetaceans have revealed the existence of significant differences in terms of depth of occurrence of each species: fin whales and pilot whales mostly live in deep waters, generally above 2000 m; sperm whales, striped and risso's dolphins are more frequent close to the continental slope; the common dolphins generally live between the continental slope and continental shelf; bottlenos dolphins are neritic (coastal) animals, with a marked preference for waters less than 100 m deep. It is important to underline, however, how this situation has in fact significantly changed in the last decades, with a drastic reduction of the available habitats for these species caused by the extension of the increasingly incessant human impact and with the consequent exclusion of cetacean populations from traditionallly optimal areas. In fact, all species of cetaceans in the Mediterranean Sea and in the Gulf of Taranto are subject to many threats due to man and, many of them, are increasingly at risk of extinction. The most important threats to their survival are caused by chemical pollution of various nature and sound (especially the prospecting for the search for hydrocarbons), accidents with boats and fishing equipment, over-exploitation of fish stocks and habitat degradation. In recent years the impact of plastic pollution among the causes of death of these species is becoming increasingly important. The percentage of sighting of the various species in our research area is divided as follows: 59% Striped dolphins, 25% Bottlenose dolphins, 10% Risso's dolphins, 5% Sperm whale, 1% Common dolphin. Over the years occasional sightings of Fin whales and Pilot whales occurred.

Striped dolphin (Stenella coeruleoalba) is a cetacean with a black or bluish grey colouration in the back and white in the ventral part. There is a black line from the eye to the anal region through each side, and another one from the eye to the pectoral fin. Mediterranean striped dolphins are slightly smaller than their neighbours from the Atlantic, and achieve a maximum length of 2-2.5 m. They may live in big groups, till hundreds of individuals. They are very acrobatics and they can jump 7 meters above the sea surface. Striped dolphins are common in the Mediterranean basin and they are the most abundant cetaceans in the Gulf of Taranto. 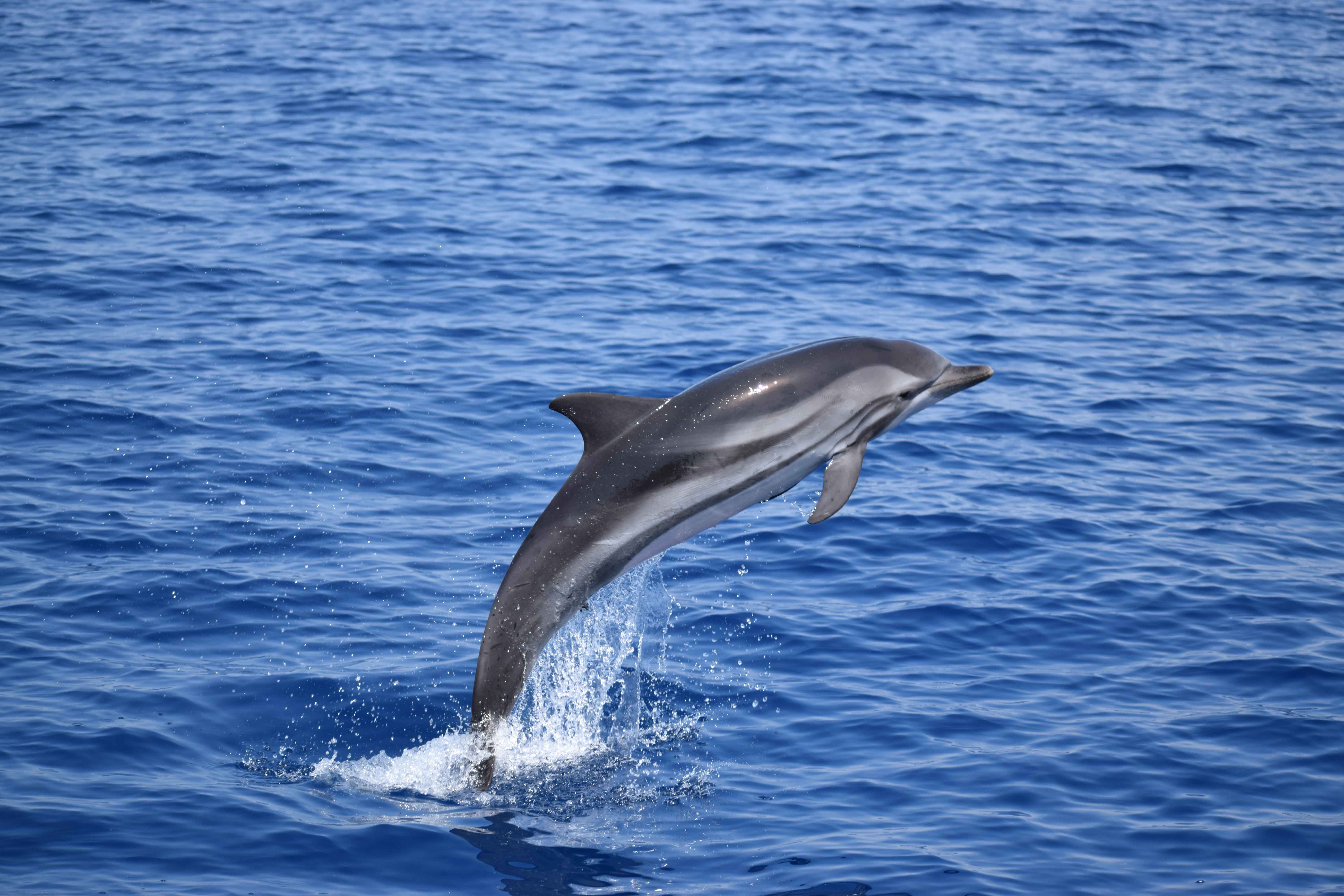 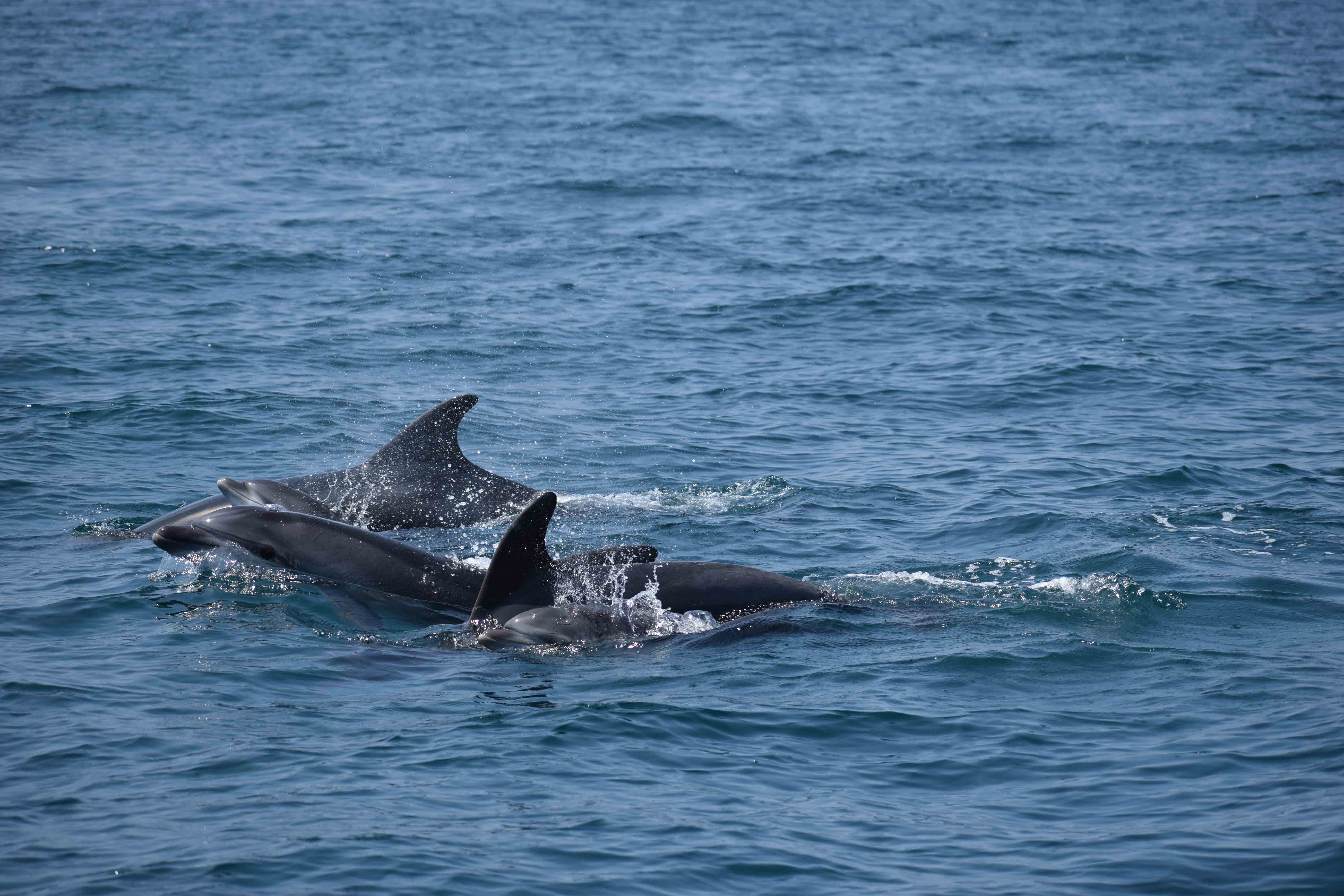 Bottlenose dolphins (Tursiops truncatus) maybe are the most well known species of cetaceans because they have been the protagonists of some movies and, over all, because they are, unfortunatly,the most common cetaceans in captivity. Their robust body is grey, clearer in the sides and white in the abdomen. Bottlenose dolphins are 2.2-3.5 m long.Their groups, integrated by females and juveniles, usually range from few individuals to about 20 animals. They live in all the coasts of the Mediterranean Sea. They are a coastal species and, becuase of this, they suffer a higher level of interaction with humans.

Risso’s dolphins (Grampus griseus) are grey whe they born and, with age, they become paler and paler for the occurrence of scars that do not disappear. They might measure 4 m. Generally, they live in groups of 3-50, despite sometimes groups of some thousands have been spotted. In the Mediterranean, they are more abundant in the western basin, where they prefer continental slope and submarine canyons. Their status of conservation is still unknown and they are considered DD (Data Deficient). 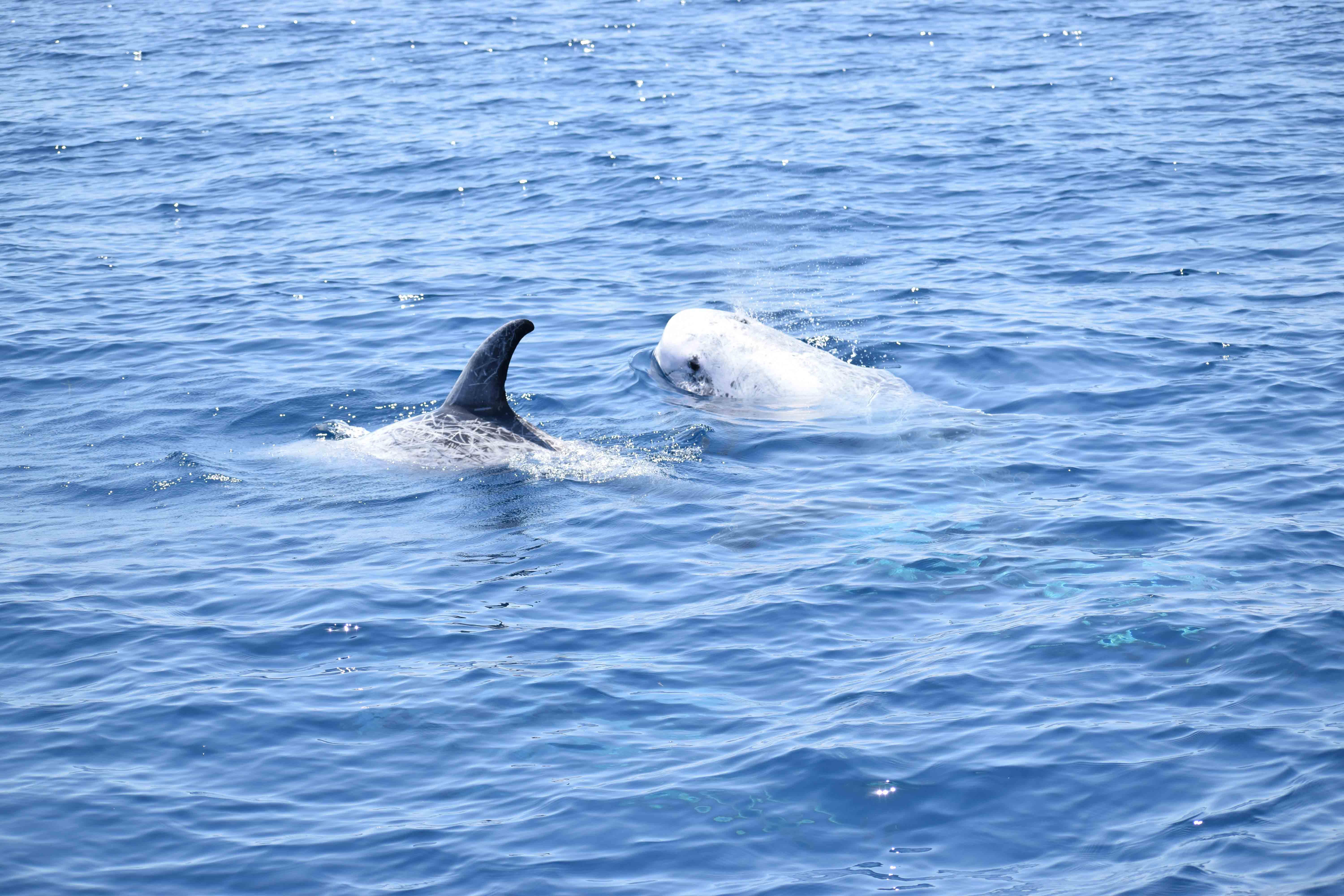 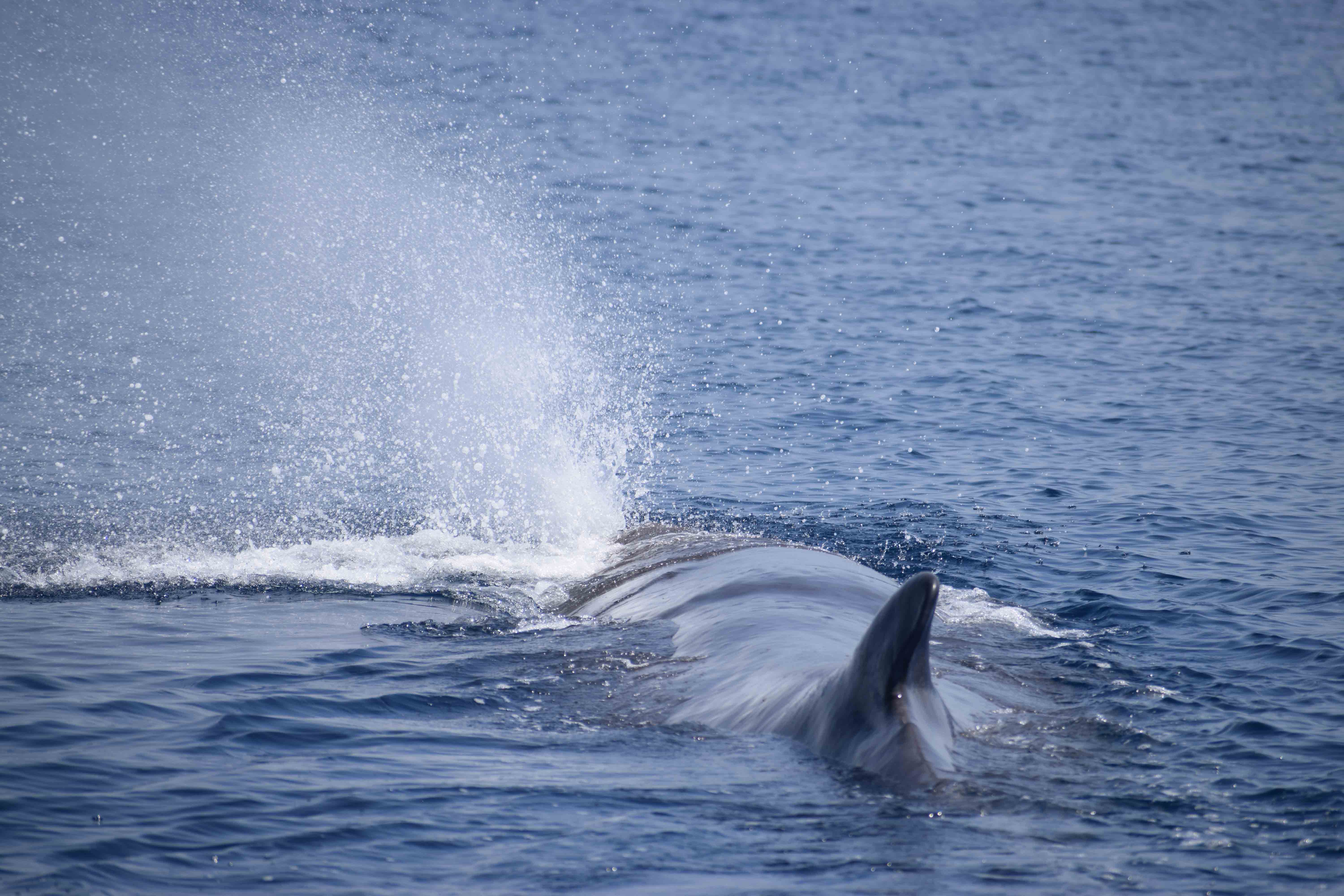 Sperm whales (Physeter macrocephalus) are the biggest toothed whales, one of the biggest cetaceans in the Mediterranean Sea and the biggest predator of the Planet. An important clue for its identification is their blow because is unique in the world of cetaceans: it's directed low, left and forwards. Their head represents 1/3 of the total length of the body. It is dark or grey, with the lower part of the mouth white. To dive, they show the caudal fin out of the water. They may be 20 m long and males are usually bigger than females (male lenght: 18-20 m; female lenght: 13-15 m lenght). Their groups are composed by females and their offspring, young males and adult males are usually solitary. The number of individuals per group is usually around 7 but bigger groups also exist. It is proofed that in the Mediterranean there is a sub-population of Sperm Whales and they are classified as Endangered species.

Short-beaked common dolphin (Delphinus delphis) is easily recognisable for the colouration of its body: dorsal region is dark and sides are cream-coloured or yellow, and constitute a V in the half of the body. Like striped dolphins, they are also quite small animals in confront of other species of cetaceans (around 2.5 m). They live in numerous groups in open waters, from 10 to 200 animals, but sometimes groups of several thousands have been seen. Despite their name, it is really difficult to observe them in the Mediterranean and they are classified as endangered. It has been calculated that in the last 40 years, their population have been reduced by half. 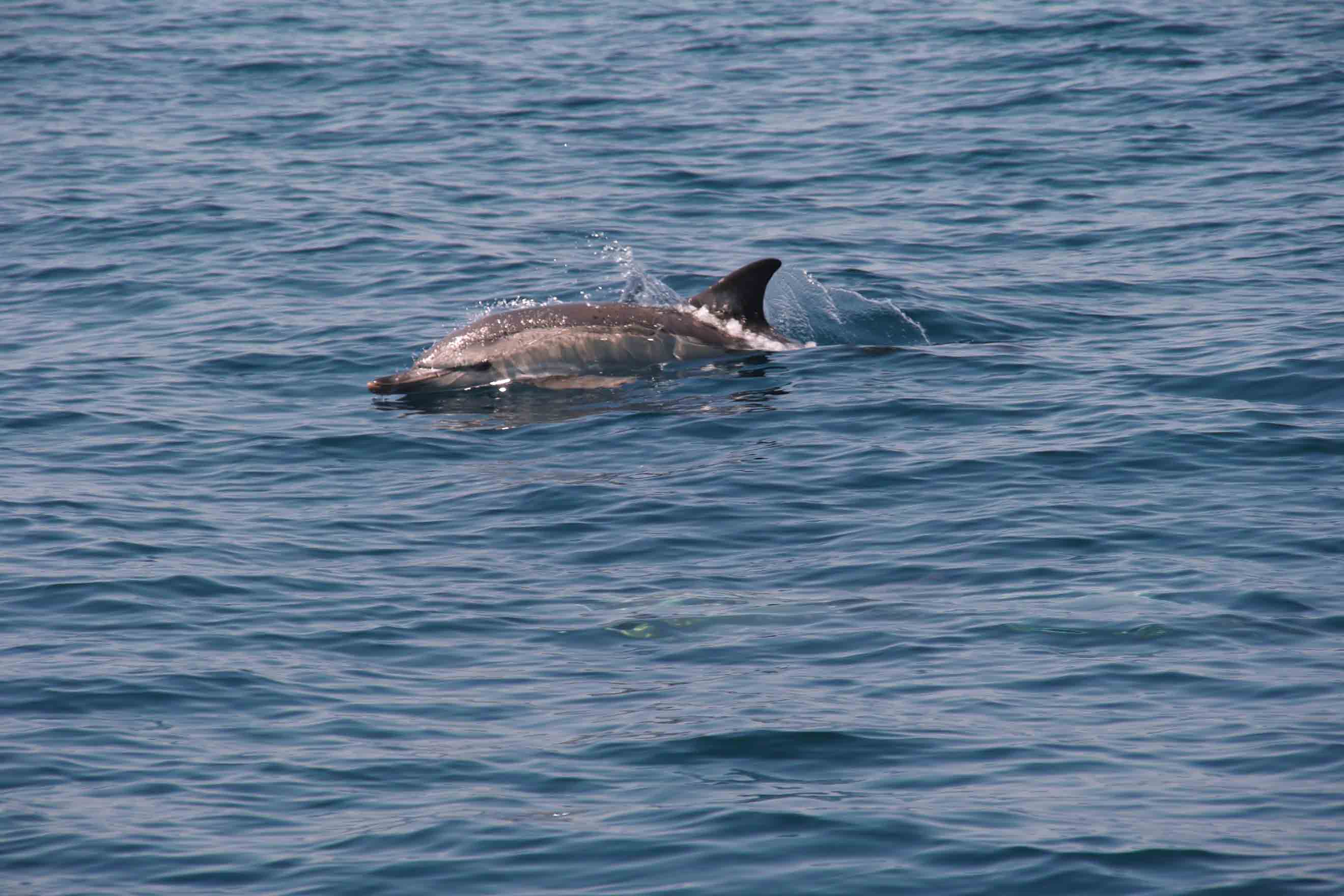 Your help is of great and fundamental importance for tomorrow. To achieve this we need supporters like you, with the desire and in any case the need to participate in activities to protect and protect the environment. Now we must fight together to protect cetaceans and to allow future generations to observe these fantastic animals in their natural environment. Nature has given us this gift, let us forgive the mistakes of the past. Together we can do it, continue to follow us and support us.